the water sweeps in linen tides
waves dither in a band of silver, the cursive script
scrolls end of the day

star her iris,
gravelly in shots of goldthread the sand rises
in the silk he holds against her skin

She ran on the cobbled stones.
Her waist-length hair oiled and plaited
that swung behind, she mistook for the dog
outside Velan paper mart.

At the temple tank, moss webbed jade in her feet
the turmeric from the Karpagambal shop
glistened on her neck as she went
seeking him in the bat-smelling belly of the shrine.

When the moon in the horoscope
moved to the eleventh house
he turned his gaze inward, sat at the temple prakaram
with the odhuvaar and trained his voice.

In the dark entrails of thrashing passion
words from the song housed in his sticky palate
she probed with her tongue into the cavity of his soul
smelling of areca nut and country hooch.

What would mark the slowness of time
as the daylight spreads like the dust of chalk, moves with the bees
on the terrace?

I hear the sharp call of parakeets
from the branches of the mango tree that grows from the seed she spits
a summer afternoon holding the fruit like a bowl of sex.

She floats near the ceiling the days he keeps away
visiting the dancer who peregrinates the temple
like an exquisite sea animal.

Bluest light pools the craters gutted in the womb
ejecting the uterine wall. She quivers at the interface with earth –
hard mantle collapses and the softness of love leavens his departure. 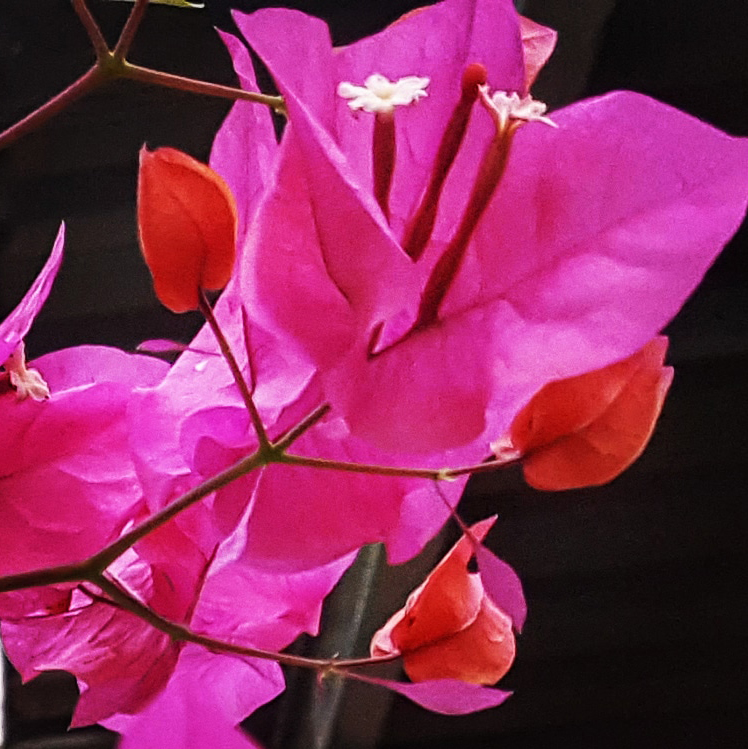 Magenta is the closest color to the blood
the veins of bougainvillea roots under the skin
to the flashes of light seen behind closed eyes
on a summer morning.

April is the month of grasping – bleeding colors
smear the mercurial sky, butterflies spin dreams
near the window, the koels in swoons of longing
knot the tall eucalyptus.

The fruits secret several ounces of sunlight, sway
through helicoptering bumblebees dazed by the smell
of leaves mulched by the moisture trapped
in breaths from the sea.

A young man looks into the settings of the camera
studying as he would the movement of fish under water.

Noise explodes as stories web under squares of sky light
to drown the old film song from a taxi playing loud in mind.

the tension of the engine uncoils muscles that cord jaw to shoulder.
Dream fans out wings, triangle of desire pulls up a chair as coffee fumes

spill along the seats in the waiting lounge. After a walnut cake
forked between sips of tea they are still there –

her hair in a lazy knot fell on bare shoulders, breasts a whisper
under the tassel of her shirt goose pimpled his skin into delirious  rash.

There is a map in my head
lanes like dark threads
where dust settles, forms pigments

that I slough years later with pumice stone.
Fragments of cells clog the drain
run through the throat of gutter

into subterranean sewers
that crisscross my city
like the map in my head. 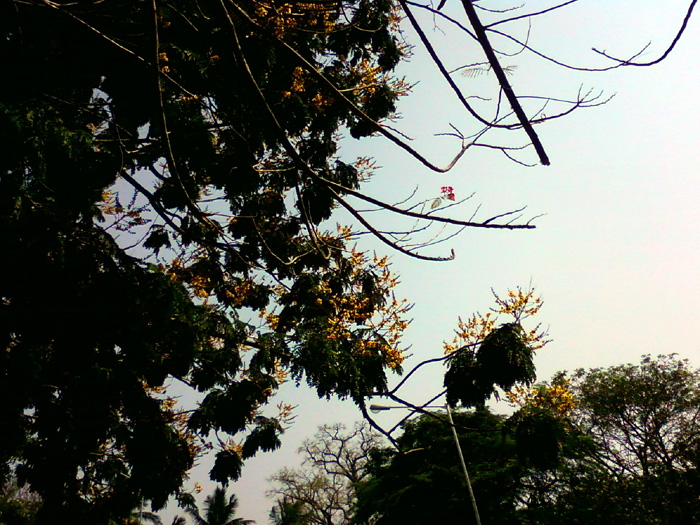 band of heat pounds on the walls, becomes a sheet of light
dark moons are formed by steel pouring into the cornea
the blue of sky so intense, appears like a large amethyst

papery yellow blossom of copper pod tree races on the tarmac
like a child tearing across the road. Trapped in a snarl of weed
dragging mud in the wings, it becomes limp like a fruit skin

birds have fallen silent, even the koel from eucalyptus tree
the banyan leaves are pale like breast of a parrot: the green
I apply as mascara to cool the eyes, shut away summer heat

Day 9 NaPoWriMO
Take a walk and write a poem: “Take a walk, or a drive. … Take along a notebook if you can. Take notes. Maybe take a picture or two. And then sit down in a park or in your yard or on the corner, and write.”

I took a walk in the neighbourhood. It was a warm afternoon, but the copper pod blossoms were lovely! 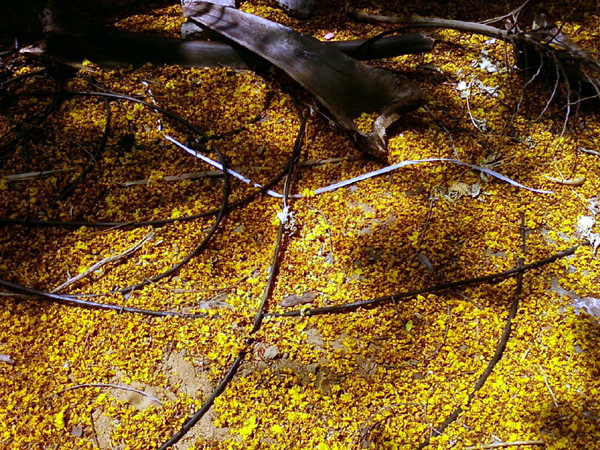 A pot of turbid yoghurt.
That is how the sky is today.
A River Of Stones

It is very hot, a slab of heat presses the city
even the birds that sing all afternoon from the casuarina tree
remain silent . he calls and says
they do not cook salads here

I go to the garden
dig the earth, the heat pouring
sweat down my armpits. take an onion peel it
cut it eat it. or a cucumber
what about tomatoes
tomatoes too. you are not helpful
I have to ask you everything
you’re like them – not cooking salads?

let the leaves remain my gardener said
the red ones turn brown and brittle
this is the lizard snake zone
safest because I hear them
then see them, their beady eyes like his

bananas are for constipation
he announces as he peels one
buy a dozen of them
they rot in the heat. he looks through the window

he has soiled his clothes, looking away he asks
what is your name
I keep forgetting these days
do not ask me to have bath
I won’t  get up from today
the enormity of the decision freezes him

the water that I have poured in my garden
keeps the earth cool –
microclimate in this city of desert.

(I went to Philosophy Talk, listened to ‘Faces, Feelings And Lies’ by Paul Ekman. I noted down words like deception, displeasure, humiliation, framework, random, behavior, repress, threat, punishment, emotion, lies, anger, detect, identity, recognition, experience, and my clinch word was micro expression – but not as psychologists use it clinically. I didn’t write a poem immediately, and when I got around to I didn’t use any of the words as I realized they could not be exorcised of their psycho pathological connotation. Instead I have used the image of a garden, have juxtaposed the microclimate that the narrator creates by tending this garden with the micro expressions of a troubled person she cares for.  All the words that I had noted, in various avatars, came to abide in the narrative of trauma and suffering, tending and caring.)

to look at the throng of faces –
each has left behind
history
like mine
in a home
that smells of garlic
where walls are painted electric blue
dreams stowed away
for our children.